As expected, Charlotte Shea did not wear her Halloween costume.  I managed to get the Catboy costume on her body but it was too small and she kept shrieking “it’s too tight! get it off me right now!” and then when we tried to wrestle her into the Owlette costume we could barely get her feet in without her kicking it off so we gave the hell up.  I had a backup pair of Halloween leggings and a shirt that said Trick or Treat for this scenario, but OF COURSE she refused to wear those too.  She wanted to pick out her own clothes, so we wore a pair of gray leggings that were a size too small, the same PJ Masks shirt she has been wearing for 2 days and a brown hoodie that is also too small.  She insisted on carrying her Boo doll with her (which then became my problem when she tired of holding her) and so we walked around the neighborhood and I held a sign above her head at every house. 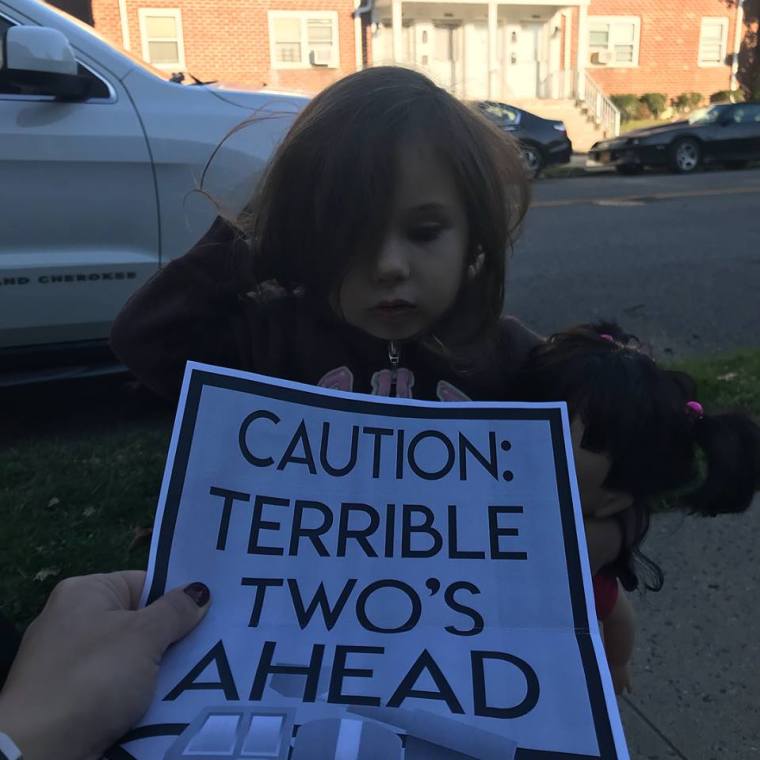 Parents got quite the chuckle out of it.  At every house we visited she did one of two things.  The first was to say “I VERY ANGRY!” instead of saying trick or treat, because of course.  And the second was to just attempt to walk in people’s houses when they opened the door.  Just straight up stepping over the threshold of stranger’s apartments.  She was not getting it.  She did, however, start to get into the swing of things when we opened up some packets of M&Ms and she exclaimed, “I LIKE THESE VERY MUCH! THESE ARE VERY GOOD!” And so to get her to keep walking we kept handing her candy.  This was very much like the scene in Monsters Inc. when Sully is placing Fruit Loops on the floor to get Boo to walk.  Why am I relating everything in my life to Monsters Inc.?  OH, THAT’S RIGHT, BECAUSE WE WATCH IT MULTIPLE TIMES EVERY SINGLE DAY.

I think Eric had the most fun out of anyone.  He was genuinely bummed when Charlotte decided she was ready to go home and so he stood outside our place in her costume handing out candy for another hour.

And now it is November 1 and Starbucks has their Christmas cups out and the Christmas music has begun so Merry Christmas?  Poor Thanksgiving is always getting shut out.

Anyway, costume or not, we had a great time.  This kid keeps me laughing even when I’m tearing my hair out.  When we went to sleep she grabbed me and Eric by the neck and said “I love you soooo much!” and made us kiss her.  And then she kept talking for about 45 minutes and wouldn’t stop, because M&Ms.