Good morning! I hope you all had a lovely weekend!  Eric and I took a few days off and went to Lancaster with Charlotte and it was seriously so awesome.  I love everything about Lancaster.  Driving through the farms and seeing the Amish on their buggies, seeing the corn fields, eating all of the bread and butter available to me.  The weather was absolutely perfect and we had a great time.

On Thursday we went to the Cracker Barrel first (of course) and we drove straight the Hands-on-House Children’s Museum.  This museum is designed for kids aged 2-10, so it was perfect for Char.  Theres a play farm, tree house, grocery store, pirate ship and some other cute exhibits.  It was nice to let her run around and play after being in the car for a while.  It took her a little while to warm up but once she did she was running from one end of the place to the other. 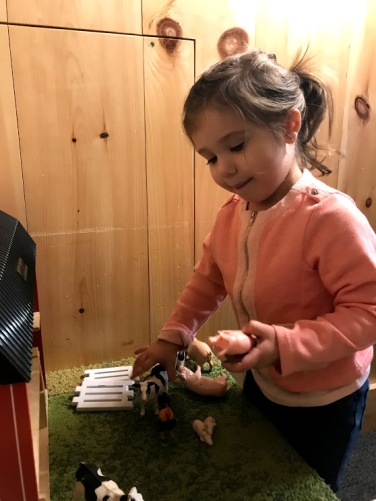 After the museum we headed to my favorite spot in all of the Lancaster area, Kitchen Kettle Village.  They have the cutest shops and they let you sample everything they sell.  EVERYTHING.  Eric was in his GLORY.  Char had ice cream and Eric and I ate about 750 million samples of pickles, relishes, jams, jellys, meats, cheeses & oils and vinegars.

On Thursday night we decided to eat at the restaurant right next to our hotel.  When we walked in with our PJ Masks backpack and PJ Masks toys, we had an inner shit fit when we realized everyone was dressed up and it was kind of a fancy place.  We were just waiting for Charlotte to melt the hell down.  But she. was. amazing.  She seriously just played with her toys the entire dinner and was SO GOOD.  We didn’t even have to give her our phone!  The food was delicious and we had a great dinner.

On Friday we went to Cherry Crest Adventure Farms where Charlotte almost murdered a baby chicken.  But the weather was amazing and we had the best time ever.  Charlotte put her face on some goats again, so there’s that.

The only thing with Charlotte that is a bit problematic at this point is that she just refuses to say hello to anyone and is generally mean to people she doesn’t know.  Like anyone that would say hi to her she would either hiss at them like a cat, scream NO as loud she could or run the other way.  On the one hand, I don’t know why she should have to say hello to people she doesn’t know if she doesn’t want to, but on the other hand, stop being so ruuuuude girl.

I love family trips, even if they are just a few days.  Charlotte would ask to hold me and Eric by the neck and say “I luh you so much!” and THAT makes it all worth it.  Love my fam. ❤