I’m going to share a photo with you all.  Can anyone guess where this photo was taken? 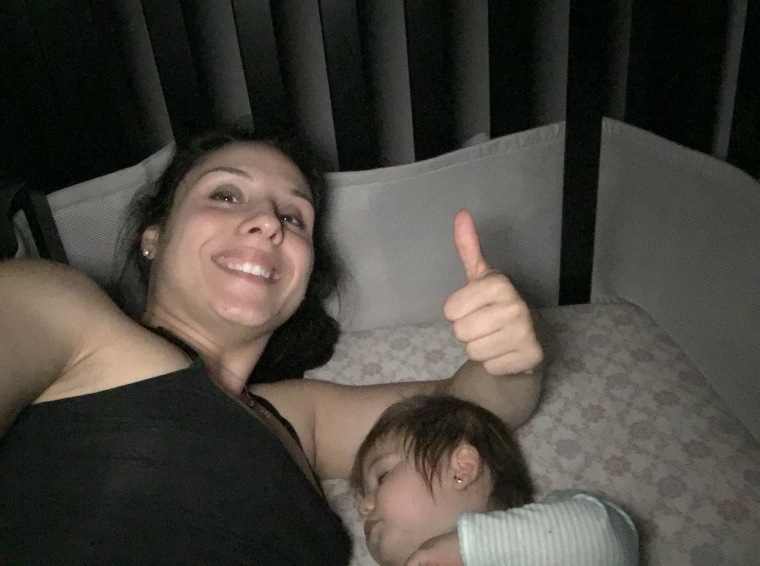 If you guessed INSIDE MY DAUGHTER’S CRIB, you guessed correctly!  Ding, ding, ding!  The prize is awarded to you!!  We’re hitting all new lows in the Schwartz household.  I thought it got easier as they got older?  Jokes on me!

Last night the beast formerly known as my daughter went to bed just fine like she has been.  She GOES to bed alright, it’s when she wakes up a few hours later and demands all of the attention that I’m fucked.  And I TRIED CRY IT OUT AGAIN SO DON’T EVEN LECTURE ME.  She started choking on her sobs and almost threw up, so I’m not doing it again.  Anyway, last night she went in to bed and then 45 minutes later Eric and I wanted to watch The Affair, and just as the opening credits rolled I heard her.  So I decided to just feed her again and stick her back in the crib to continue watching the show.  Easy peasy.

She went back in and then picked her head up and screamed at me and sat up and screamed again.  So I decided that since I have tried just about everything, why not just hop into the fucking crib and see what happens.  I am SURE this is frowned upon just as much as her sleeping in my bed is frowned upon.  But you know what?  I AM TOO EXHAUSTED TO GIVE A SHIT.  She was SO confused that it was comical.  BUT DO YOU SEE HER EYES CLOSED?  SHE WENT TO SLEEP.  So I hopped out with all the grace of a deer trying to cross a crowded highway and got to watch the show and sleep for 2 hours before she woke up and ruined my REM sleep once again.  And then I brought her into bed with me, because I’ve fucked up her sleeping habits enough that I may as well continue on the path of pure destruction.

But we slept, and I don’t want to claw my eyes out today, so technically I WIN.